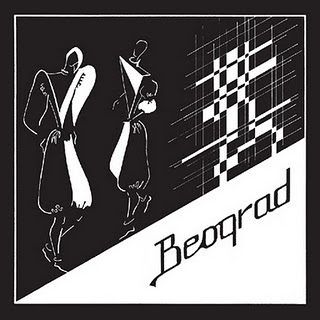 BEOGRAD was a electronic pop outfit founded by
Dejan Stanisavljevic along with Aleksandar Rodic and Lubodrag Bubalo in
Belgrade, Serbia, in the former Yugoslavia. In 1982 they released their
one and only 7" single, the classic and highly sought-after minimal
electro smasher 'T.V'/'Sanjas li u boji?', with its wonderful Roland
CR-78 drum machine, manually played bass synth and high note sequences,
lovely harmonies and Serbian vocals. Then, in 1983, their only LP 'Remek
depo' was released. Anna Logue Records has now put together a nice 7"EP
including both the original 7" tracks plus the superior track from the
album, 'Mrak', as well as two very rough and pretty horrible sounding
short instrumental demo recordings of 'T.V.' and 'Mrak', included here
for the sakes of obscurity, rareness and fun. Definitely a must-have for
all into minimal electro, synth wave, cold wave or whatever you wanna
call it.
Features: limited edition, black vinyl, b&w UV varnished sleeve, b&w labels and double-sided
postcard with lyrics (both Serbian and English), mastered by A.P., Sleeve : Steve.