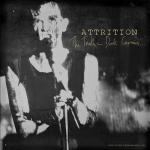 Recordings from the Attrition april 1985 tour of the Netherlands...

"Smiling, at the Hypogonder club" - originally released on Third Mind records in November 1985.

"The Wrecking Ground" appeared in instrumental form as the B-side to 1987's "Take Five EP.

"In the Attic" and "The Aftermath" remained unreleased until now...