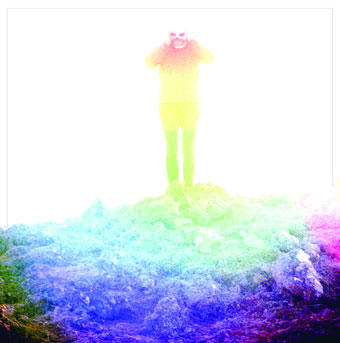 It's been said before that Stanley Kubrick seemed like a classical
composer who created films instead -- that the images played out more
like arias and overtures than a matinee movie. The inverse of that is
probably the only way to approach Selenelion, the debut LP from
Vaura. Less a collection of songs and more like an expedition into an
elegantly foreboding universe, the eleven tracks that comprise the
latest release from Wierd Records sound as if they were each crafted to
evoke unearthly scenery and monolithic events.

From harsh distortion and aggressive screams to cold and shimmering clean guitars and vocals, the spectrum of sound on Selenelion is both varied and atmospherically cohesive. Thunderous drums, droning
synthesizers, percussive metals, acoustic guitars, and vocal
arrangements that sometimes approach ritualistic plainchant recall
artists like Ulver and Swans. Vaura's particular blend of brutality and
romantic melodicism can be attributed in part to the stylistic mesh of
musicians: Kevin Hufnagel, Toby Driver, Josh Strawn, and Charlie Schmid
also play in Gorguts, Dysrhythmia, Kayo Dot, Secret Chiefs 3, and
Religious to Damn. Selenelion was recorded and mixed by Colin
Marston of progressive black metallists Krallice, and signals a nod for
Wierd Records to the roots of founder Pieter Schoolwerth who is also
member of the seminal noise outfit Bloodyminded and a continuing
supporter of acts like Locrian.

The album title refers to a horizontal lunar eclipse: the moment at
which the sun and the eclipsed moon can be seen at the same time. With
song titles referencing everything from an Etruscan demoness to a
Luciferian take on the conversion of St. Paul, and with artwork by the
German photographer Alexander Binder, the unifying thread is an
unmistakable sense of shadow-drenched enigma. "Drachma" refers to the
coins that bought passage for the dead into the underworld, suggesting
that everything following that track is part of an Orpheus-like journey.
But repeated nods to the occult literature of Jorge Luis Borges, in
particular to "The Aleph" and "The Zahir," two stories that deal with
infinity and vision, suggest that beyond the the dark hallucinations
there is also a serious meditation taking place on the limits and
paradoxes of seeing. Approaching such subject matter by way of
something as invisible and intangible as music, Vaura invites the
listener to share in a visceral, yet intimate ceremony of sensuality and
destruction.