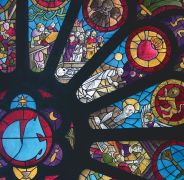 About the sun and the moon...

La Mort
De L'Hippocampe is
something very different from Porn.Darsteller. There is not much pop in
this music and there is not much elektro in it either... it has
experimental, industrial
and classical sides, all sounds are done with analog equipment like
Minimoog and tape echo, and acoustic instruments. This album is
somewhere between cabaret, Die Todliche Doris and
Schönberg…