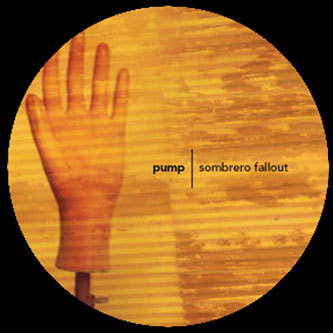 From the annals of '80s tape culture Plague Records have uncovered raw
gold in the form of Pump's semi-mythical 'Sombrero Fallout' album.
Previously known as MFH on their own YHR label, Pump were Andrew Cox and
David Elliott, a pair of like-minded electronic music fiends who met at
Brighton uni in '79. After spilling five cassette albums of underground
industrial strains inspired by Throbbing Gristle, Cabaret Voltaire,
Faust and Heldon, they spent the middle of the '80s largely estranged,
with David writing for the notorious Sounds magazine alongside David
Tibet, and Andrew working in Cornwall. In '87 they finally recorded new
material, heard on 'The Decoration of The Duma Continues', before
colluding for this, their final album which was supposed to emerge on
Trident Music International, but sadly didn't due to unknown reasons.
The untimely death of Andrew in 2009 prompted a resurgence of interest,
and with the utmost respect, we're f*cking blessed that it did as it's
just the find of the year. Quite interestingly the album was mixed by
Colin Potter of Nurse With Wound, which goes some way to describing the
close, dark ambient nature of their sound, but there's many more factors
at play which make 'Sombrero Fallout' so riveting. 'A Knife, possibly'
sets a sour atmosphere with chugging slow drum machines and a guitar
drone industrially dubbed for arcing, widescreen effect, while 'Yukiko'
features spiraling marimbas diffused into stereo patterns with mournful,
ghostly synths sounding like Zoviet*France gone strangely new age. At
the mid way point we enter 'The 'Wife' Container', an incredibly
claustrophobic and sickly doomscape with over-saturated bass hum and the
distant sound of groaning guitars tortured in some sadistic dungeon
ritual for over nine minutes. No sh*t, this is intensely dark stuff!
Next, 'Apolinaire Enammelled' combines a reverb laden motorik backbeat
somewhere between Stephen Morris and Klaus Dinger, with twirling
raga-esque psychedelia, again benefitting from the Colin Potter
treatment to sound drugged to the nails, followed with the stoically
centred 'Etoile de mer', a blissfully darkside arrangement of beatless
ambience. Their swan song 'Falling From Grace' approaches the end with a
chilling display of unholy, crawling synth tones and spectral axe work
shielding a lone vocal, delivered with reserve and an arcane sense of
timing. Fuuuck. This album has really touched a nerve in our office,
reminding us of our favourite Industrial, darkwave and New Beat, or all
those other '80s genres whose unholy allure we've always been
susceptible to, and best of all, it does it without the slightest hint
of fromage or pastiche. Honestly, this is beyond essential for anyone
with a darker soul.
http://boomkat.com/cds/322693-pump-sombrero-fallout