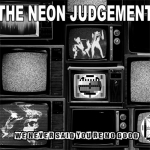 The complete recording of a livesession broadcasted directly in
stereo on national radio in 1984 combined with two very rare tracks is
available now for the first time on the vinyl. In a limited edition of 520 hand-numbered copies, 180 gram vinyl, no re-press.

Time can have a strange effect on music. It puts certain aspects
in perspective and makes others redundant. Things that are important at
first, no longer matter over the years, while superficial details seem
to become more valuable.

Enter The Neon Judgement. Dirk Da Davo's and TB Frank's band
certainly has been affected by this double time-effect. Although these
Belgian Leuven-based musicians have often been considered the founding
fathers of EBM (Electronic Body Music), the high-tech genre form the
early 80'ies, combining industrial and electro music, from which later
originated new beat and techno...

About a quarter of a century after the first single ‘Factory
Walk’ (1982) The Neon Judgement appears to be overtaking time. The
band's creative model – electronic music with a rock approach – now
exists in many forms and varieties. Furthermore The Neon Judgement's
music seems to have been rediscovered by a new and younger generation of
hip musicians from all over the world. Today, renowned artists such as
Dave Clarke, The Hacker en Tiga often emulate the bands early work (1981
- 1985)