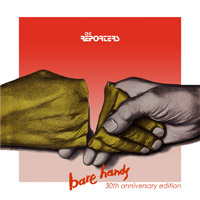 Geheimnis Records is pleased to announce the reissue of the classic 1983
album “Bare Hands” by The Reporters, including the tracks from the 1982
7” single “Computer World / I Wanna Know”, in a special limited edition
release entitled “Bare Hands / 30th anniversary edition”. This reissue
is an emotionally charged one , because both the band’s releases are
among our all-time favorite releases to have come out from the Greek new
wave scene of the ‘80s and, apart from this, the album is the first LP
release by the legendary label “Creep Records”. This year, we’re
celebrating 30 years, since their first release back in 1982 on Creep
Records.
The band itself was a collaboration and coexistence of 5
very talented young musicians, that unfortunately split up just a year
and a half after its first appearance. Nevertheless, they managed to
leave us with 2 records (one 7” single and a full-length LP album) of a
very-well-constructed and formed New Wave/Post Rock sound, that was, at
once quite contemporary, but at the same time very unconventional and
unexpected. All the instruments are in the right place, at the right
time, abandoning though traditional tempo/form and refusing to become
predictable and finally boring. The bass line of Solon (Akis)
Stathopoulos is dominant, the drums of George Roumanis are unmistakable
and with depth, the guitar of Paraskevas (Voulis) Karamikes is as sharp
as a surgical blade, the synthesizers of Chrisostomos (Makis)
Mouratoglou create all the stressed, anguished and sometimes vivid – or
someone might say happy – environment and of course, Costas Pothoulakis
(Parthenogenesis, Homicide, Villa 21) stays on the edge, adding his
characteristic voice to the whole structure. We missed him so much and
this reissue is an homage to his sudden loss. The result of their
collaboration is a collection of 10 songs of sound-balancing frenzy,
that you can’t find easily, especially in groups of that period, all the
more remarkable for a band which released only 2 records and then
disappeared
The reissue will come out on July 2012 (exact date t.b.a.) in 400
hand-numbered, remastered from the original master tapes, highly
collectable copies in a double 10”album, including the tracks of both
the album and the 7”, with its original insert + some rare photos of the
band. Half of the copies will be pressed in original black vinyl and
the rest in transparent orange.