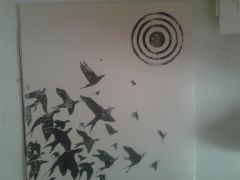 La Mort De L’Hippocampe was the short-lived project by
Jérôme Fontan after he stopped his elektro project Porn.Darsteller.The project
ended with the unexpected death of Jérôme in June 2011.
This is the second and
last album, but was produced before the ‘Symphonie Neuronale’ album released
earlier this year. Jérôme preferred that album to be released the first. So it
was done…