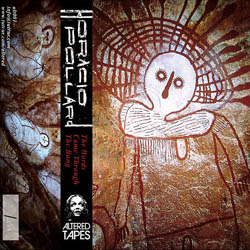 Half
English, half Argentine "noise-eccentric" HORACIO POLLARD has been
active in the field of experimental music since 2002 and has released a
number of CD/Rs on various labels as well as a split 7" with MOHA!. A
member of CLIFFORD TORUS and FULLY BLOWN DENTAL REFORM, he also runs his
own label Neigh%Music. Armed with a Korg DDD1 sampler / drum machine,
he delivers here an exhilarating avalanche of distorted jams filled with
heavy analogue riffs, hypnotic jazzy grooves and fierce noise-drenched
rhymes. DISSECTING TABLE meets MOHA! meets GODFLESH or tribal industrial
funk at its most devastating!