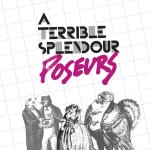 a terrible splendour are a london-based duo who weave tales of
blackmail and despair, of cruelty and of heartbreak. their sound is a
darkly luxurious synthesized pop. they make a drama out of a crisis.

the band’s limited edition cassette ep, released on desire in autumn
2012, sold out fast and left audiences wanting more. their wish is now
granted with the release of the band’s debut album poseurs, released on
desire.

it was recorded by the band with james aparicio (credits include
spiritualized, these new puritans, grinderman) and jjd (soft riot,
savage furs, radio berlin).

tracks fr.om this album have previously featured on several
compilations, such as 290.625 by flexiwave (first run sold out) and the
ninthwave electro-pop sampler (#1 on the amazon usa free download
chart). they are currently involved in releasing ‘and you’ll find them
in the basement’, a compilation documenting the modern london synth
scene.

their live shows are a theatre of love and death, with performances
drawing on weimar-era cabaret. the recent self-made video for their
track victimless crime displays an aesthetic that references german
impressionist cinema and gothic storytelling.

live highlights include a triumphant performance at the exit festival
in serbia and well-received shows on the london circuit (camden barfly,
the lexington, hoxton bar and kitchen, the macbeth) and the uk
synth/wave scene (never come back, bedsitland, dancing and laughing,
festival of sins).

‘a world of intrigue and disillusionment’ (electro and pop)

‘doused in glamour, dank with weirdness’ (some of it was true)

‘the first time we heard them we felt an attraction we could not control, like an arrow, a love at first sight’ (the scrap mag)

you are cordially invited to spend an evening in the company of a terrible splendour.