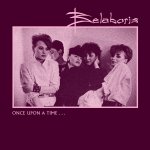 Belaboris was born in 1982 as the brainchild of Finnish producer
Kimmo Miettinen. What Malcolm McLaren had been to The Sex Pistols,
Miettinen was to Belaboris. He would put together an all-girl band that
looked great in photographs but were backed by professional musicians.
The first line-up was Vilma Vainikainen on main vocals, Sisko
Vainikainen and Rita on back-up plus Jake and Mari who did not sing at
all. The backing band behind Belaboris was a local New Wave group called
Tyhjät Patterit ( which translates to Empty Batteries). The main
songwriter was Esa Ijäs (guitar, synthesizer) along with his bandmates
Ari Ijäs (bass) and Martti Jalonen (drums). Belaboris’ debut 12″ single
“Kuolleet Peilit” was released in November 1982. It was followed by the
“Odotus” 7″ single in February 1983. The B-side was a cover of the Serge
Gainsbourg song “Baby Pop”. The band broke up and posthumously released
a mini-LP called “Olipa Kerran” in 1984. WIthin a few months, an all
new Belaboris line-up was put together. This version was a trio
consisting of Saara Soisalo (lead vocals), Sallamaari Muhonen (backing
vocals) and Minna Soisalo (“moral support”). They released a 7″ single
“Rakkauden Jälkeen”, an atmospheric electronic version of 60’s
Scandinavian pop hit by Carola. Shortly thereafter this line-up was
quietly shelved and no further efforts were made.
“Once Upon A Time” collects songs from all three EP releases and the
“Olipa Kerran” mini-LP as well as two unreleased demos never before on
vinyl. In Finland the synthetic Futurist/New Romantic pop was simply
called “Futu”. Belaboris were in their own peculiar, undefinable
no-woman’s-land, in between the Finnish Futu and Gothic scenes. Between
1982 and 1984 Belaboris crafted catchy, melodic synthpop with the
occasional guitar. Their lyrics were stylistically “kitchen sink
melodramas” with occasional Gothic elements inspired by movies. The name
Belaboris, is a combination of the horror actors Bela Lugosi and Boris
Karloff.
All songs have been remastered for vinyl by George Horn at Fantasy
Studios in Berkeley. The vinyl comes housed in a full color jacket and
includes an insert with liner notes, lyrics and photos. Three decades
on, Belaboris have grown a considerable posthumous cult reputation that
has spread also outside their native country, even defying the language
barrier. Maybe Miettinen’s idea worked, after all.