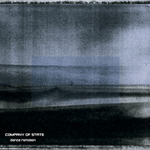 Belgian new wave & DIY minimal synth duo that started out
experimenting with a rhythm box and post-punk guitars in the vein of
early Cabaret Voltaire. Rudolf Hecke explains the origin of the band:
“By the end of the seventies we were both living in small towns near
Leuven. I had been playing in bands since 1973 and was still living with
my parents in Veltem-Beisem where the garage was my rehearsal-room. One
day he showed up, he was looking for a songwriter, he’d be the singer.
He rode a bike.”

The group debuted in 1983 on their own label with an incredible 7inch
(Dark/Discipline - Dance Remotion/Here as I Am). Rudolf Hecke provided
screeching guitarplay with different forms of feedback and distortion,
Paul Taes expressed his mood through his singing and the rhythm box did
what it had to do, it rumbled along. It made sense for COS to join the
Anything But Records label run by Ludo Camberlin (A Blaze Colour), where
they shared the roster with bands like Neon Judgement, Poésie Noire,
Aimless Device, Men 2nd, ….

On stage they always delivered a spectacle to the public. “Well, we
very much liked to mess up things. Most of the time there was blood, I
broke my nose once and ended up at the hospital when I cut my left arm
with a razor blade on stage. We had some medieval weapons we’d like to
throw around while the strobo’s were lit.”

On this retrospective LP release the emphasis lies on the first few
years of the band including their first 7inch and demo recordings from
that period. When the experiments were still rough, the spirit high and
the results chaotic and surprisingly dynamic.