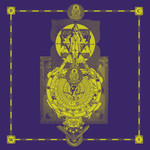 Warehouse Invocation, Senys Magick and Consulted Acid were recorded in Austin TX between 2012 - 2013 at home and direct to tape with no overdubs or multi-tracking.Riverbank was also recorded at home in early 2014 in one take with a mic placed outside of the window to record the the sounds of the river late at night. Vinyl EQ and Lacquer Cut by George Horn at Fantasy Studios, Berkeley, CA 2016A1,A2,B2 originally released on cassette by Obsolete Future Records in 2013.