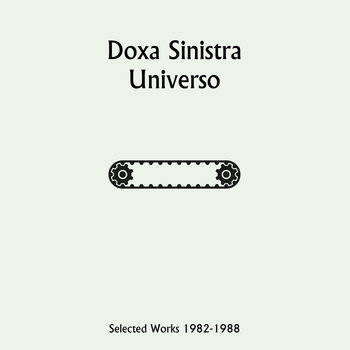 Mannequin Records presens a double-LP compilation of the Dutch industrial-experimental heroes Doxa Sinistra. Preciously selected by the expert ears of Frank Brinkhuis, head of Trumpett, Universo spans from 1982 to 1988 through their entire discography. Doxa Sinistra were formed in Amsterdam, The Netherlands, early 1982. On the strength of live performances at Paradiso and Ultra venue Oktopus, the two-piece band was invited by Trumpett to record an album in the Freakowitz & Einstein Studio in Den Burg on Texel. Armed with their Korg MS-10 and Korg MS-20 synths they took the ferry to the West Frisian island, and spent a week recording in the legendary Trumpett HQ. The result, the debut cassette Via Del Latte, was released in June 1982. Just months later band member R. K. kidnapped the band name, formed a new duo and played one live date. After that the project fizzled out. Until early 1984, when Trumpett and Doxa Sinistra received an invitation from Italian cassette label ADN to record a new album. The invitation was accepted and Doxa Sinistra Mark II was born. Conveyer Belt, recorded between June 1984 and February 1985, appeared as an ADN/Trumpett co-release in August 1985. After the move of the Trumpett Studios to Amsterdam late 1986, Doxa Sinistra started demoing a new album in the Summer of 1987